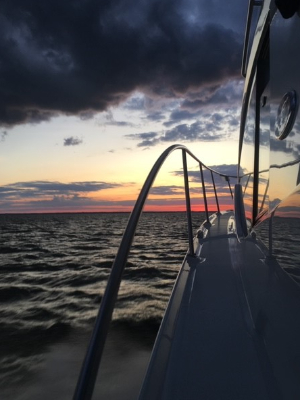 Sunset on Bay Dog
20 miles to GO!!!
A little background history on the bay.  Captain John Smith was the first to explore the bay.  He made 2 voyages in 1608.   What did he see??  A very different bay than we have today!!

If John Smith were to retrace his 1608 Chesapeake Bay voyages today, he would need more than his original maps to find his way. Humans have dramatically changed the region’s land, water and animal populations since then.

One of the most visible changes is the amount and diversity of animals that live in and around the Bay. In Smith's days, oysters "lay as thick as stones," and the Bay and its rivers contained more sturgeon "than could be devoured by dog or man.”

During Smith’s time, the land surrounding the Bay was home to a vast array of wildlife: bears, wolves, cougars, falcons, partridges, waterfowl, and a variety of animals named in the old English language that cannot be identified today.

Although native tribes cleared some small plots of land for farming and firewood, much of the Bay watershed remained undisturbed. Smith wrote about bald cypress trees that were 18 feet around the base and up to 80 feet tall without a branch. Some trees were so large that a canoe made from a single tree could hold 40 men.

Unlike the murky summer waters in today's Chesapeake, the water during Smith's time was substantially clearer. Trees formed a thick, continuous canopy around the Bay’s shoreline, holding soil in place and absorbing rainfall from storms. Algae grew but did not overwhelm the Bay’s ecosystem as it does now.

Blue Crab
You've raised $150 or more toward saving the Bay!

Founded in 1967, the Chesapeake Bay Foundation is a nonprofit 501(c)(3) conservation organization dedicated to saving a national treasure—the Chesapeake Bay and its rivers and streams. Donations are tax-deductible to the full extent of the law.

Please note that this team page is customizable. The views expressed here do not necessarily represent or reflect the views of CBF. If you have any concerns with the content of this page, please reach out to our event team at walkthewatershed@cbf.org.

View the dashboardmobile dashboard to see how far I've walked!

If you think this page contains objectionable content, please inform the system administrator.